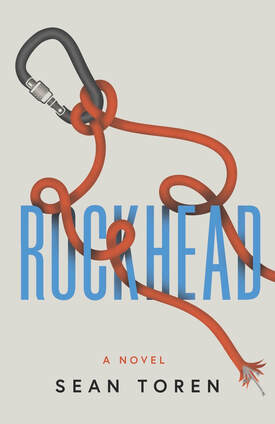 ​"The author does an admirable job of going inside a climber’s world, describing the various facets of the sport and van life. . .
​This thoughtful climbing tale skillfully explores spiritual athleticism." - Kirkus Reviews

​In Rockhead, 27 year old geographer, Atlas, is obsessed with the intense, athletic world of technical rock climbing—and with the question of whether he should leave his brilliant, driven girlfriend for an exciting fellow climber. As he and his climbing partner, Dade (whose pregnant wife can't decide if she wants him at home or not), travel across America towards Yosemite, they find themselves searching for the ‘rockhead’—a state of intense mental and physical focus that will help them climb better.

During their travels they also struggle with a set of questions that initially overshadow—and ultimately encompass—the rockhead: How do you do a single thing well—like repair your ailing van? How do you love in the right way? And, perhaps the key to it all: how do you live your best life?

At the end of the novel Atlas finds his own, powerful answers. He's taken an enormous fall and huddles on a tiny ledge, 2,600 feet high up on El Capitan in Yosemite Valley—so high up that the blood dripping from his broken tooth will evaporate before it ever reaches the ground.

​Dade might be dying and the rope that Atlas needs to reach him is in shreds. Atlas must make a fateful decision: to wait for rescue and risk Dade's death, or to try and reach Dade himself by climbing without a rope on the most dangerous section of the route.

How Atlas gets to this moment is the story of Rockhead. And how he tackles it, living as if it's last thing he'll ever do, is something that will transform his life--whether he lives for six more decades, or the six seconds it would take for gravity to rip him to the valley floor.

Excerpt from the Climbing Magazine review:
"Climbing fiction is a rarity, especially in novel form, and especially done well. So it was a real treat to get my hands on an early copy of Sean Toren’s ambitious Rockhead: A Novel… If you’re a fan of climbing fiction, fiction, or climbing literature in general, I’d strongly encourage you to give Rockhead a read. It’s very well written, it’s something different, and…it will leave you haunted and pondering for days after you finish the novel."
​
Read the full Climbing Magazine Review of Rockhead.

As Matt Samet, editor of Climbing Magazine, wrote in a pre-publication endorsement:
"Ultimately, in a sport as packed with peril, adventure, and drama as climbing, it is the human stories that connect us to the practitioners' passion. In the excellently crafted Rockhead, Sean Toren brings you to the rarified heights in the most authentic of ways: by creating characters we care about, then putting us amidst their struggle with masterful storytelling only a core climber could create."