Dusk at Deep Lake, in the Wind River Range, Wyoming
Glossary for Rockhead
I've complied here a list of the most common climbing terms used in Rockhead (and most rock climbing situations). ​

To dig even deeper into terminology,  check out the delightful and super-comprehensive The Climbing Dictionary: Mountaineering Slang, Terms, Neologism & Lingo: An illustrated Reference, by Matt Samet. ​

To understand more about how climbing works and how to climb, check out Climbing Magazine's Learn to Climb Trad: A Complete Beginner's Guide, or Rock & Ice's How To series. 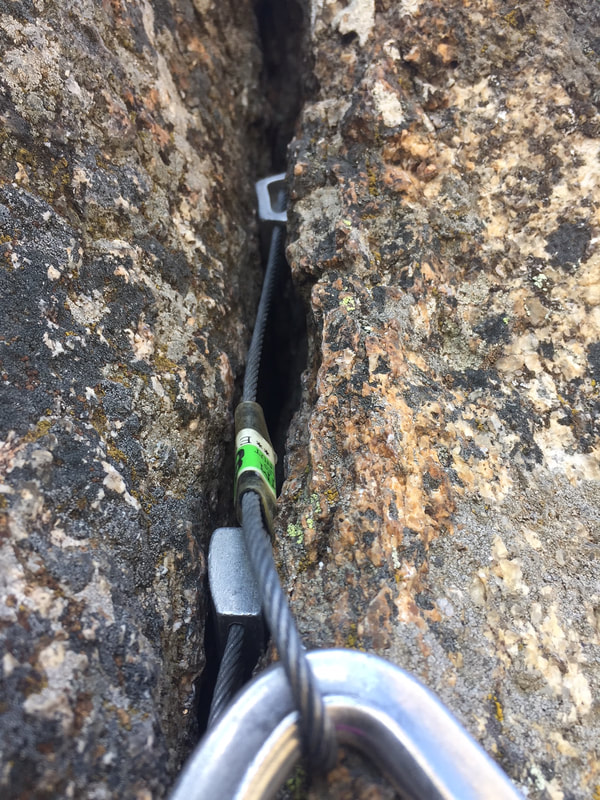 Aid Climbing: A1, A2, A3, A4, A5
Ascending rock or ice with the use of artificial aid such as pitons, nuts or camming devices. On rare occasions this involves such unusual tactics as a lasso, and even, in former East Germany, standing on a belayer’s shoulders.

Abseil (see also 'rappel')
From the German for 'down rope'. To lower oneself down a rope, usually by means of a belay plate attached to one's harness.

Aiders (Etriers)
Flexible ladders normally made out of flat webbing that can be ascended while aid climbing.

Belay
To secure a climber by means of a rope, usually with a belay plate attached to one's harness or anchor.

Belay on! (climbing command)
The person climbing is protected by the rope and the belayer.

Belay off! (climbing command)
The climber is no longer on belay—and no longer safe.

Beta
A description of the moves needed to overcome a certain section of rock; also, a description of how to get somewhere specific or do something specific.

Bolt
An expansion bolt with a hanger on it, into which a carabiner can be clipped for protection. Bolts are drilled by hand with a hammer and bit, or with a battery or gas powered drill. They are safe and caused a revolution in climbing, allowing climbers to ascend crackless, overhanging faces with greater security.

Booty
Gear that is found, either after it’s been dropped and is on the ground, or when it's been left in the rock by someone who couldn't get it out (or rappelled off it in an emergency).

Boson’s chair
Also used in sailing. A board, like a swing, with rope attached at either end. Allows user to sit comfortably during particularly long belays, or when the rock is overhanging.

Caboose
Usually a length of wide diameter PVC pipe with a sealed end, a removable cap, and a loop of cord that allows it to be clipped to the bottom of a haul bag on big wall. Used for hauling excrement (as opposed to dropping it off the wall in paper bags, which was the old tactic).

Cairn
A small tower made of stacked rocks to help mark out a path.

Cam, camming device
A device that has several spring-loaded, opposed cams. When placed correctly into a crack it wedges itself firmly in place—but can easily be removed (also called 'Friend', 'Camalot’, ‘TCU’).

Carabiner
A small oval of aluminum with a spring-loaded gate. Carabiners are used for everything in climbing: connecting the rope to protection, connecting the climber to the rope during a rappel, clipping a water bottle to a harness, etc.

Choss, Chossy
Bad, rotten rock, with blocks and gravel that can fall.

Clean, To
To remove the protection from a route.

Clean Climbing
To climb an aid route with normal gear (and no pitons), so that the rock isn't damaged.

Climbing! (climbing command)
The climber is now moving. Used to get the belayer’s attention after a long pause, such as when placing difficult gear, or when the climber can’t be seen, such as when above an overhang or around a corner.

Clip-up
A sport climbing route that is protected entirely with bolts and is relatively safe.

Cragging
Climbing multiple routes at a short cliff, usually only a pitch or two high—as opposed to bouldering or big wall climbing.

Draw (quickdraw)
A small loop of webbing with a carabiner at each end.

Fifi Hook
Used in Aid climbing, the Fifi is a small, rounded hook that is tied directly into a climber’s harness or aider, allowing them to easily connect to, and disconnect from, their highest point of gear.

Flake, To
To uncoil a rope and lay it out in a way that it can't get tangled when used for belaying. (Also, 'to Spaghetti'.)

Flash, To
To climb a route on the very first try, although you may have looked it over on rappel, or gotten 'beta' from other climbers. See also 'on-sight', 'redpoint' and 'pinkpoint'.

Free Solo, To
To climb without a rope or any protection at all. (See also ‘Solo climbing’).

Lead, To
During lead climbing, the first climber (the ‘leader’) climbs with a rope tied into her harness. This rope is clipped into protection, which will stop her fall (theoretically). A rough rule of thumb is that a climber will fall at least twice the distance that she is above a 'piece' of pro. For example, if a climber places a piece of gear 20 feet into the route and then falls from 25 feet, she is '5 feet out' from her last piece, and will fall at least 10 feet, plus rope stretch and any slack the belayer leaves in the system. If that piece of pro fails and pops out, the climber will hit the ground. Once the climber reaches the end of the pitch, she will set up a belay, either by clipping into anchors placed by the first ascentionist, or by building one out of gear.
Belayed with a rope from above, the ‘second’ climber can climb in relative safety, removing any protection placed by the leader. The climbers can either rappel the route, walk to another location to rappel, or continue onto a second pitch of the multi-pitch climb.

Nut
A wedge of metal that is placed into cracks in the rock as protection. Smaller nuts are swaged onto a piece of wire cable, while larger pieces are threaded with cord.

On-sight
To climb a route on the very first try, without having previewed it, and without any 'beta'.

Piton
A piece of iron or steel, folded in a 'v' or simply a long, thin wedge, which is hammered into cracks in the rock. Can damage the rock.

Portaledge
A collapsible frame with a 'bed' made out of nylon and generally a tent that deploys on top of the frame. Sweet.

Pro, Protection
Protection is any gear, such as bolts, camming units, nuts, slings, pitons, or hooks, that a climber places in, on or around the rock to stop a fall.

Rappel, To
From the French, 'to recall'. To descend a rope that hangs in such a way that it can be retrieved after descending. Seen also 'Abseil'.

Red point, pink point
Originally, 'rotpunkt', from the German. To lead climb a route without falling, usually after practicing, or ‘working’ the route. 'On-sight' and 'flash' ascents are also redpoints. A pinkpoint is when the protection is left in the rock (usually quickdraws that are hanging on bolts, on sport climbing routes).

Register, summit
At the top of some mountains and pinnacles, including many of the spires in the Needles of South Dakota and on top of Devil's Tower, there are summit registers, where climbers write down the date and style of ascent. In the Needles, these are often simple glass jars with a notebook stuffed inside. At Devil's Tower there's a big binder that fits in a large, steel canister.

Rock! (climbing command)
A warning yelled when anything (rock, beer bottle, gear) falls down towards the base of a climb and could hit someone below.

Rope
All modern ropes are 'kernmantle' style, with individual plastic threads that run, unbroken, for the length of the rope (the 'kern' or core) and a 'mantle' of tough, woven fibers to protect the core. They are incredibly strong and can hold multiple falls. These ropes are ‘dynamic’ and stretch when stressed, and provide a small cushion for a falling climber.

RPs/HBs
Tiny nuts, made of aluminum or brass, often used for aid climbing in particularly small cracks. The 'heads' of these tend to break off under long falls (and sometimes, it seems, for no reason at all).

Sandbag, To
To underestimate the difficulty of a route (or one’s abilities). As in, “He sandbagged me. That was way harder then he said it was.”

Second, To
To follow a leader and pull any gear.

Send, To
To climb a route successfully.

Slack! (climbing command)
A command from a climber to a belayer to put more slack into the system, such as when clipping into protection or when needing to move more easily.

Sling (also 'runner')
A sewn or knotted length of webbing used to connect to protection, a belay, etc.

Solo Climbing
To climb alone, either without a rope (free solo) or with a self-belaying rope system.

Sport Climbing
To climb routes where the rock has been pre-protected with bolts, whether on rock or in a climbing gym. As opposed to ‘traditional’ or ‘adventure’ climbing.

Tension! (also, Up rope!) (climbing command)
A command used by a climber that the slack should be taken out of a rope system.

Top rope
A rope with a belay from above while seconding. Also, climbing at a crag or gym with the rope running through anchors above.

‘Trad’, Traditional Climbing
Also known as ‘adventure climbing’. As opposed to sport climbing, where bolts are preplaced in the rock, trad climbing involves placing and removing one’s protection. It also refers to routes on crags and mountains, as opposed to in gyms.

Trundle, To
To knock off loose rock in a controlled manner.

Watch me! (climbing command)
Yelled by a climber when she wants the belayer to pay special attention. Basically, she’s saying, “Things are dicey here.”

Zip line A small diameter rope carried by a leader on big walls that can be used to retrieve any gear too heavy or bulky to carry.